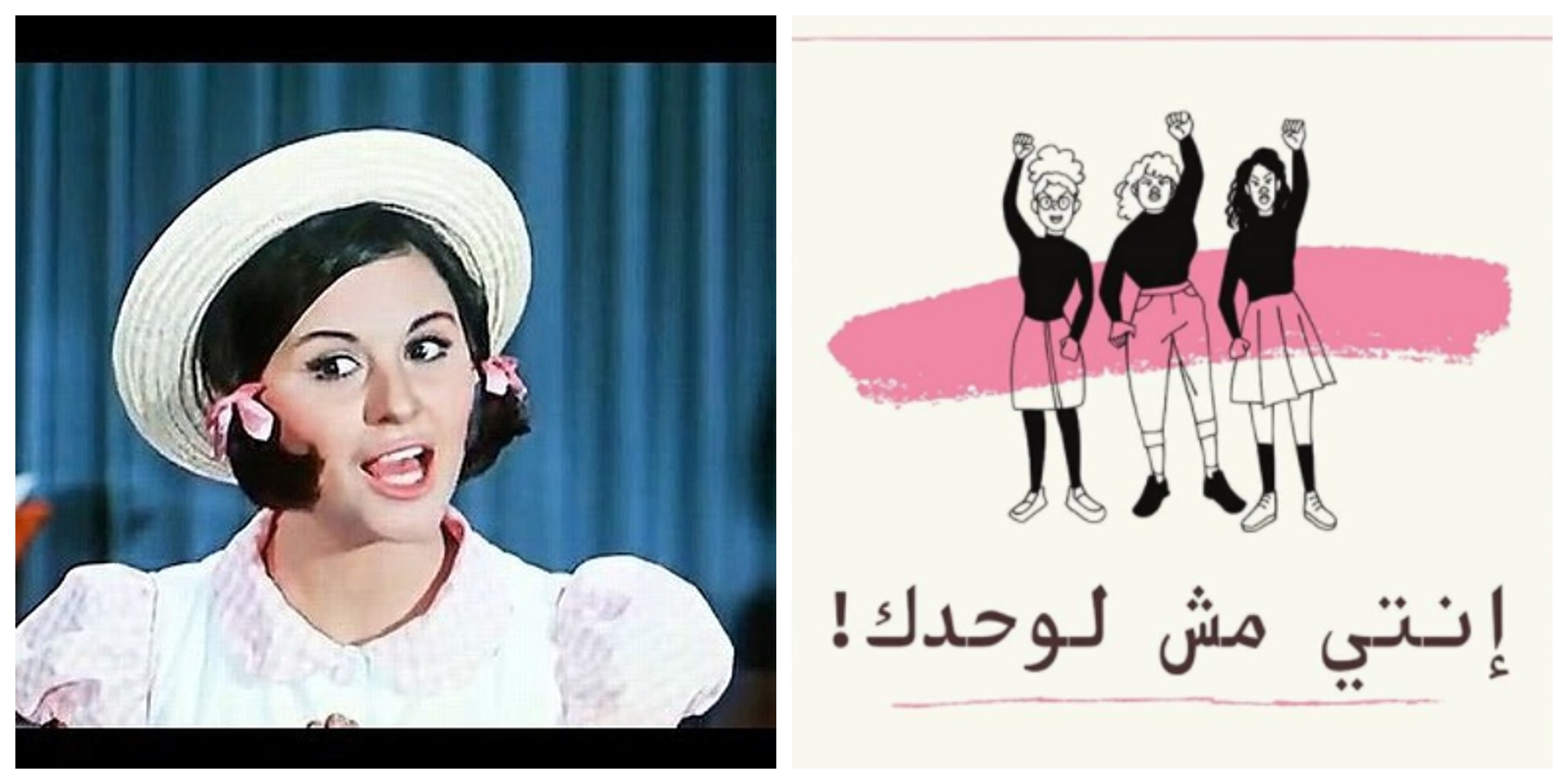 Earlier this year in July, Egypt’s young and digital savvy feminists took on social media platforms, mainly Instagram and Twitter, to start their very own movement in exposing rapists in their community. In less than a month, they helped push for their arrest, a new law, catch the attention of international media and journalists, and most recently an order by the Public Prosecutor to launch an investigation into the ‘Fairmont crime’.

Yet the impact these young digital feminists had in simply just shaking society’s ground cannot be overlooked. It should be interesting to reflect on how today’s young activists parallel to Souad Hosny’s bold ‘young female personality’ in some of her films back in the day. They aren’t just curating new tactics and tools for other generations to use and learn from, but are also changing perceptions on the ‘young female’, who for decades has often been portrayed as weak, naive and in need of other’s protection, and in most cases, evokes negative reactions in society.

The sheer fact that it is ‘youth driven’ is what should inspire more research, and not just the effects of social media activism. Ageism against youth is rarely discussed. Countless research has been written on social media and its contribution to the feminist movement, but there hasn’t been enough spotlight shed on the youth factor, and how these young girls have become politicized and active very early on – curating their own very tactics and strategies.

Iranian-American scholar Asef Bayat pointed out that research focused on youth social movements is still limited, “Youth as a social category has curiously been absent from the prevalent social movement debates. In general, scholarly attempts to conceptualize the meanings and modalities of youth movements remain rare.”

Focus on youth activism was touched upon by Julia Schuster on digital feminists in New Zealand, titled “Invisible feminists? Social media and young women’s political participation,” Schuster highlights the ‘generational divide’ that exists in feminist activism today, with many of the politically active women of older generations becoming unaware of the “political energy young women put into online communications.”

In the safe space of their bedrooms, which for many also means being free from family, societal and political restrictions, these young women raise awareness and challenge the myth that harassment and rape crimes are rare in society. They share stories, feminist writings and quotes, legal information, political and social discussions, and collectively unite to support other survivors to refer them to the right places of support. “It starts conversations and encourages individuals who care about feminism to learn more and understand how they can help. It is basically like a safe space for a tiny community of activists,” Zeina Amr Al Dessoky, founder of Instagram account “Catcalls of Cairo” tells Egyptian Streets.

These young feminists are also actively reconstructing and redefining girlhood, though their young activism is often overshadowed by other developments that erases their own role. As Jessica Taft says in Rebel Girls: Youth Activism and Social Change Across the Americas, “despite their activism, girls are rarely considered and written about as significant political actors. They appear but do not speak.”

This ‘youthful female spirit’ hasn’t been around in Egypt for a long time, or even shown or expressed on Egyptian television screens and cinema through revolutionary lens. Most recently was the film, “Banat Thanawy,” in early 2020, which despite the fact does a positive step in presenting teenage romantic relationships on screen, it was still constricted in reflecting the power and activism these young girls can also have, portraying them instead as naïve beings that need “protection”.

Previously, film actress Soad Hosny’s star persona as “light” and “youthful” with a certain “edge” helped to an extent challenge old modes of social conduct, according to Mona Abdel Fadil and Koen Van Eynde in the paper “Golden age divas on the silver screen: Challenging or conforming to dominant gender norms?”

For instance, in her 1966 film, ‘Too Young for Love,’ Soad Hosny presents an image of a “young girl” in a very different light, portraying her as a little more playful, daring and adventurous, particularly in this singing clip from the film. In Super Aziza (1961), Soad Hosny also plays the character of the ‘adorable girl’ Aziza, who eventually rebels against the authority of her half-brother Abbas who is repressive towards women.

However, this persona is usually seen with cynicism and apprehension in society, and thereby invites negative adverse reactions, which is usually happens to her characters in film. “While Soad Hosny’s roles as ‘the adorable girl’ attempt to carve out their own identity, not only as women but as equal to men (and other women), this often backfires and becomes the origin of trouble for them in a society that is not yet ready for this type of ‘radical’ thought,” El Fadil and Eynde note.

In her own life, it is speculated that Soad Hosny suffered from depression, and her tragic ending by falling off her balcony in 2001, can be seen as an extension of the gruesome fate for the ‘daring young girl’ personality that is often seen as something ‘dangerous’, ‘evil’ or the ‘femme fatale’ in societies.

Soad Hosny’s youthful daring persona in films at the time can be paralleled with Egypt’s current young feminists. Today, this ‘youthful female spirit’ that is challenging the patriarchal modes of society is leading them to face constant threats and blackmails, which resulted in the silence of the popular Instagram account ‘Assault Police’. For many, they are also seen as ‘radicals’, ‘crazy’ or ‘too emotional’ – belittling their passion to create real change.

*The opinions and ideas expressed in this article do not reflect the views of Egyptian Streets’ editorial team any other institution with which they are affiliated. To submit an opinion article, please email [email protected].